We have been warning about computer security for a good while now, and it has happened again – BIG TIME. Last week a world-wide ransomware virus was released, and to date it has affected computers in over 150 countries … and still growing. 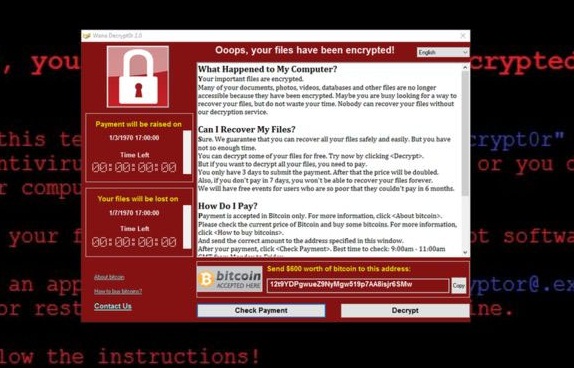 So what is ‘ransomware’?  It is particularly disturbing because you won’t know until a message appears on your computer screen telling you that your files have already been encrypted. If you look at your files, you’ll see a long number instead of the file name. For a ransom payment (in bitcoins) your data will be un-encrypted. This nasty bug has infected both servers and Internet connected computers, so nobody is really safe. Because of an alert individual in the UK, the US was spared from the initial attack, however, it is very possible that the attackers can make a few adjustments and send out more modified versions that will be even more devastating than the first wave. At the time of this writing, 3 modifications have been released.

This is not a ‘Russian’ attack; in fact, Russia was one of the first to be hit, along with Britain and Japan. The US is only just now compiling the toll, but we know FedEx and a large number of US based business have been on the receiving end. What it ‘does’ show is that the Internet is very vulnerable to cyber attack on a large scale.

So what does this have to do with property managers? The property management business is one of the most likely and vulnerable targets for future attacks. The property managers hold sensitive information on owners, their bank accounts, email addresses, social security numbers and rental properties. They also have information on millions of tenants, their bank accounts, passwords, social security numbers and other confidential information. Most of the web-based property management software companies were rushed to the market within the past 5 years, and I would venture that most of them do not have even moderate protection against an advanced hack attack.

While any computer connected to the Internet is at risk, we think that desktop software is much better protected. You would be smart to even have a computer that is not connected to the Internet in any way, so that you can run desktop based software in the event of a cyber attack or another ransomware attack. It will happen to you eventually, it is just a matter of time, and it could even come in the form of a natural disaster that is man-made or comes via Mother Nature. No matter what kind of property management software you have, be sure to make local backups of your data – don’t count on a stranger’s word that they maintain ‘redundant’ copies of your data. Since the servers are connected, a massive attack is likely to affect all of them. Your best defense is a copy of your data that you can hold in your hand.

At Tenant File, we have already saved a good number of customers that had their data encrypted, by helping them restore their program and backups. We’ve heard horror stories of web-based software customers that lost everything, and had to start from scratch, hunting through file folders to try and re-create their owner and tenant financial history. And they are left wondering if they will be held responsible for the owner and tenant data that is now in a hacker’s hands. We hope you never have to experience that!